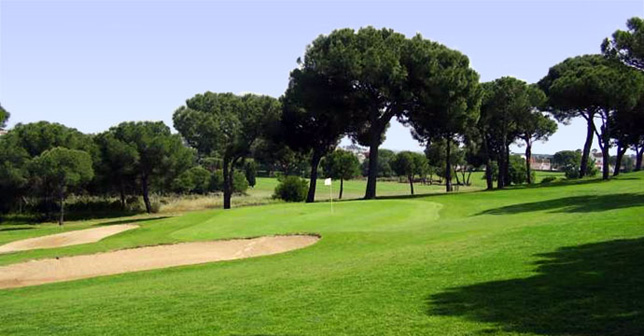 The Bellavista golf course (Huelva), the oldest in Andalusia (1916), received the 1st exchange match between the Portuguese Golf Seniors National Association and the Seniors of the host club.

The Portuguese – Spanish tournament took place in warm weather and some wind, a golf course in excellent condition (good and fast greens), with 60 players, scoring the top ten of each team for the trophy.

Highlighting the hole-in-one obtained by the Portuguese Manuel Batista on hole 3 (par 3 with 132 meters) and going up slightly. In his first hole in one in competition, he played with an 8-iron.

In gross he won Daniel Gene with 29 points and the best Portuguese was Manuel Batista in 5th place with 25 points.

The women’s competition, with twenty competitors (seven from ANSG) was won by Rita Vecino with 36 points. Jeanette Van Der Struik was the best ANSG’s with 31 points.

The prizes were distributed during a social lunch at the host club, with the “captain” of the Southern Delegation of ANSG, José Gago Leiria, presenting the main trophy to Alberto Rodriguez, director of Bellavista Golf Course.

The “second hand” of this exchange tournament will take place on 9th of September at Quinta da Ria Golf Course in Tavira.

You can also read other posts about Golf in Portugal:
Portugal golf holidays – all inclusive on Algarve hotels
Vale Do Lobo Ocean Course
Inspiring Golf Ahead Of The OPEN