Our website is currently showing you the prices based on the following date : 2020-04-05 . Playing Date
Game Options
Game Options
From 16th Mar till 11th Apr
Due to the Spanish Government decisions and COVID-19 the golf course will be closed until further notice.
We hope have better news as soon circumstances allowed. In the meantime please stay safe and look after yourself and your loved ones.
Tee Times Golf Agency team.

Lo Romero is an enjoyable par 72 golf course that runs through a natural landscape and measures just over six kilometres from the yellow tees, a bit less from the red tees. Enjoy the tranquilty of nature mixed with sport where the only sounds you will hear is the rustling sound produced by the Mediterranean pine branches and the sole company of the gnawing squirrels that habitat the trees. From some of the holes in the 18 hole layout you can admire the panoramic view of the blue skyline horizon where the sea meets the sky. The strategic positioning of Lo Romero which sits on an old Pear and Apple orchard; an enviable location; high quality maintenance; a well cared for environmental landscape and a golf course design that allows players to achieve a great result, all combine together to give Lo Romero Golf the admirable requisites in it´s favour: Lo Romero is a par 72, that measure 6,237 metres from the white tees, 6,061 metres from the yellow tees, 5,635 metres from the blue tees and 5,260 metres from the red tees..
Facilities

Sean Fraser - 2019-07-15
Great course, good greens. Limited facilities after the round, could improve. 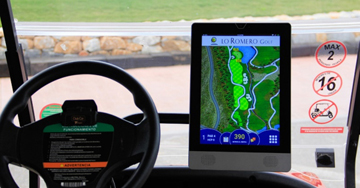 For this purpose, a GPS system has been installed in all of its brand new fleet of 70 buggies Tempo, which provides the player with perfect help during the golf round and at the same time becomes a useful tool for the golf course by having all vehicles permanently located.

The geolocator system provides greater security to the players in case of any accident, being able to send them informative messages about any incident that may occur such as a pipe breakage, electrical storm warnings or any other message of interest.

The system also informs the pace of the game, which allows the Marshalls team to avoid slow play immediately. In fact, it has been possible to reduce considerably the time of play in days of much influx of players which has a direct effect on a better experience for most visiting golfers.

GPS is equipped with the latest technologies
- Large anti-glare screen (21x29cm) with HD graphics and videos.
- Indicates the distances in yards or meters to the greens or any other point of the hole such as bunkers, lakes, etc.
- Marshall assistance can be requested at any time.
- Overflight videos every hole.
- Virtual tour card, which can be sent by email at the end of the game.
- 11 configuration languages

Provisions that add to the selected extras just six months ago when the Lo Romero Golf buggies fleet was completely renovated taking care of every detail: premium wraparound seats, led headlights and fridge.

The entire fleet is presented, in addition, equipped with a courtesy pack consisting of two attractive water tetra brik custom with the image of the golf course and 6 wooden tees with logo. At the aesthetic level, every detail has also been taken care of. The burgundy color of the cars is consistent with the visual identity of the golf course and the seats are embroidered with their anagram.

In the words of Victoriano Jiménez, owner of Lo Romero Golf, “we have opted for these buggies for the quality of the product in terms of its technology, for its comfort and aesthetics, as well as for the impeccable after-sales service provided by Riversa, management that we have been checking in the last ten years ”.

Alicante ’s ideal location on the Mediterranean coast makes it a highly attractive destination for beach lovers and golfers alike. Situated on the East coast of Spain , this region boasts some of the most impressive golf courses in Spain . Blessed with very short, mild winters, you can still enjoy the glorious blue flag beaches after your golf round in the Spanish sunshine, even in January.

The El Altet Beach located in Elche, is made up of a dune complex with natural vegetation. Being 1000m in length and 100m wide, this blue flag beach is popular with wind surfers. There are several nearby Golf courses. The Font Del Llop Golf Resort, which has a playing area of international size that has five exit tees for each hole. The Alenda Golf Course, completed in October 1999. It covers 49 hectares of land, 18 holes, par 72 and 6,257 metres in length, as well as an excellent practice area and Elche Golf School, the first to open in the Community of Valencia, offers spectactular facilities.

The San Juan Beach, Alicante , is just 25kms from Alicante airport. It stretches 2900m from the El Campello fishing village to Cabo de las Huertas. Best known for its crystal clear waters and golden sands, this coastal strip is also popular with water sports enthusiasts. What finer place to relax after a round at the Alicante golf course, described as “A challenge for the game and a feast for the eyes”. Going a little further afield you can play a round at the beautiful Bonalba Golf course with its 5 lakes or El Planito with its two golf courses, 18 holes Par 72 championship, and the other a 9 hole par 27.

La Caleta Beach, Orihuela, in the Southern province of Alicante , provides great facilities. The beach received 11 blue flags in 2017. The 387m coastal strip has natural protection from the cape itself and a sea wall, resulting in a calm sea. There is an old Watchtower at La Caleta, which was once used to monitor pirate attacks during the 16th Century. There are numerous quality golf courses nearby the award winning beach, including: Las Colinas Golf & Country Club, La Finca, Vistabella, La Marquesa and Lo Romero Golf.