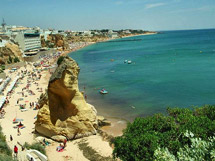 First and foremost, Albufeira is famed for its beaches, for the countless shades and tones of its rocks and cliffs. This is a place where people live to the rhythm of the great holiday destinations, sunbathing during the day and at sunset flocking to enjoy the restaurants, bars and discotheques that enliven the nighttime hours.

Just a few miles inland and everything changes. The green of the countryside is dotted with almond, fig, orange and pine trees and decorated chimneys stand out against the ochre of tiled roofs. Bucolic villages invite you to experience a way of life rooted in the tranquillity of nature, to add another dimension to your holidays. 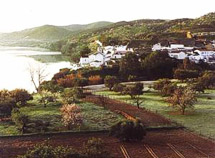 The blue ribbon of the river framed by the cool green of riverside vegetation, of fertile orchards and vegetable gardens.

The dark ochre of hills as round as rolled pebbles, flecked with colour by cistus plants, holm oaks and the occasional olive tree. Houses with walls of schist or baked mud with the dazzle of lime huddled together in hamlets lost among the hills. Such contrasts are to be found in Alcoutim and the surrounding municipality, where, even in mid-winter, thousands of almond trees burst into pale pink blossom. There are open spaces whose natural beauty remains unspoilt, where a multitude of wild flowers are to be found and a fascinating variety of bird species can be observed. 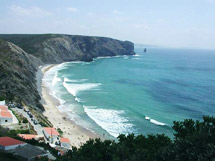 The boundaries of Aljezur municipality mark out a broad rectangle delimited by the sea and the hills, and its landscapes reflect this dual influence.

While the coast is marked by high cliffs beneath which huddle sandy coves and pristine dunes, the hinterland is a place of rolling hills covered with vegetation that recede, row upon row, as far as the eye can see. Between the two extends a broad strip of fertile fields and valleys where the traditional crops of vegetables, sweet potatoes and peanuts are still grown.

Time spent in Aljezur municipality is thus an opportunity to rediscover peace and tranquillity, to experience a silence broken only by the singing of birds or the crash of waves on the rocks and to savour the beauty of verdant fields, gentle slopes swathed in wild flowers and majestic cliffs with the pounding sea as backdrop.

The elegant outline of flamingos.

The dusty gold of soft sand, the turquoise blue of warm waters. Vast ranges of hills covered in a bright carpet of wild flowers. The tranquil countryside along the banks of the Guadiana, lush with orchards and vegetable gardens. These are just a few facets of a municipality that stretches from the sea to tile hinterland, with a river as its boundary. 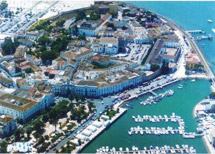 Faro's beaches and the Ria Formosa, where flamingos can be seen taking to the air, mark the border with the sea.

On the flat terrain behind are the houses and buildings of Faro, green vegetable plots that thrive on the fertile land and water wheels that were once used to draw water from the ground another reminder of the city's Moorish heritage. In the distance a semi-circle of gentle hills, their slopes clad with fruit trees, frames the landscape. Villages where life goes on at the same easy pace as in centuries past, where unassuming churches conceal art works of astonishing beauty, where vestiges of the magnificence of the Romans still litter the fields. These are among the charms of Faro and its municipality, an ideal starting point for exciting voyages of discovery. 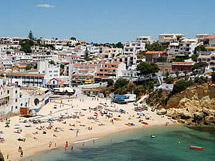 Bunches of grapes ripening beneath the hot summer sun. The shapes, colours and designs of ceramics that belong to a tradition centuries old. Such are the attractions of Lagoa and its surroundings, along with the colourful fishing port of Ferragudo, the romantic chapel of Nossa Senhora da Rocha perched high above the sea, and the fascinating rock formations of Algar Seco. 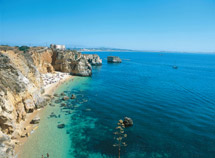 Gigantic sculptures carved by the pounding waves that plunge into a crystal sea. The iridescent greens of sea caves. Beach after beach of soft sand tucked away between ochre cliffs or stretching clear to the horizon. Verdant countryside dotted with the white of houses. Just a few reasons for visiting Aljezur municipality and discovering one of the most attractive parts of the Algarve. 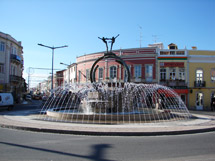 The racy, cosmopolitan lifestyle of the world's leading tourist centres.

A long ribbon of fine, golden sand tucked between the blue of the sea and the bold ochres of the cliffs. The splendour of tiles in a chapel that is itself a work of art. The changing greens of the orchards and the woods of the hills. An endless variety of decorated chimneys, carefully wrought in a filigree of whitewashed stone and art. Wide open spaces where it is possible to rediscover the meaning of solitude and listen to the silence of nature. With all this and more, Louie municipality is a place of sunshine and colour, fun and excitement. 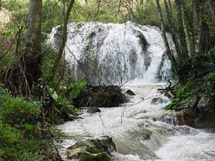 "Green, how I love you green".

The poet could have been writing of the wooded slopes of Monchique, for after the heat of the Algarve's beaches it is the coolness of the hills that is most striking. These are landscapes that weave a spell of reverie and spur the visitor to stride out in search of unglimpsed horizons that end only in the sea. Here crystalline rivers gurgle between rocks and boulders, while the presence of man is evident in the white dots of houses and the slopes cut into terraces and planted with fruit trees and vegetable plots. The charms of Monchique municipality extend a never ending invitation. 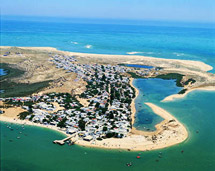 Firstly there are the islands, long sand banks that are an ideal spot for swimming and sunbathing.

Next come the tranquil waters of the Rid Formosa, a unique natural habitat teeming with plant and animal species. And in the background loom the hills of the interior, ringed like an amphitheatre, covered with orchards, dotted with white cottages. Three distinct environments, each with its special charm, which make Olhão a great place for a holiday.

First the blue sea and its gently lapping waves.

Then fine, golden sands framed by cliffs and rocks. The cosmopolitan atmosphere of an international tourism destination. This is the Algarve of beach holidays in the sun.

Portimão and its municipality have more to offer though. A rich heritage of historical monuments. The eternal natural beauty of the Ria de Alvor. The charm of cultivated fields, of slopes covered with pine trees and wild flowers. The allure of walking up into the hills and looking down on the Algarve from a new perspective. 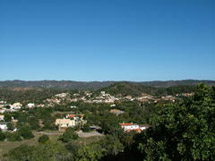 The rounded forms of hills covered with cistus bushes, oaks and arbutus-berry trees.

Landscapes like watercolours, white houses scattered among verdant fields and orchards. Reflections in the slowly moving surface of a river. The play of light and shade on an old whitewashed wall. In such simple things lies the beauty of São Brás de Alportel and its municipality, each an invitation to come, relax and enjoy. 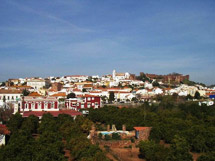 The deep green foliage of orange trees in fertile valleys.

The blue sea and the fast-paced life of an international seaside resort. The picturesque charm of houses surrounded by almond and carob trees. The broad sweep of hills that are a haven for ramblers and nature-lovers. These are among the attractions of Silves municipality, a holiday destination where it is a pleasure simply- to be alive. 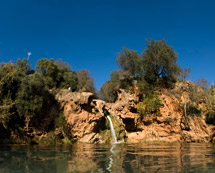 Beautiful empty beaches with sands that seem to go on forever.

Fields of orange trees, heavy with the scent of blossom. Then hills of fig and almond trees and houses with dazzling whitewashed walls and distinctive chimneys decorated to resemble the fine tracery of lace. And last of all, the great open spaces of the hills, where eagles soar, birds sing and flowers bloom.

This is just a hint of the charms of Tavira and its municipality, an invitation to come and find out more. 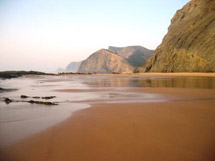 The unspoilt coastline, with its dramatic horizons of cliffs and sea. The many menhirs that bear witness to prehistoric rites. Memories of the epic of the Discoveries and the enigmatic figure of Prince Henry the Navigator.

Such are the attractions of Vila do Bispo and its municipality, a vast triangle in which the sea is a constant presence. And where nature combines with history to create a unique region that is worth taking the time to get to know. 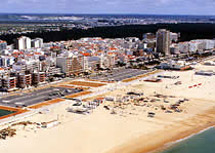 The pale gold of mile after mile of sandy beaches.

The turquoise blue of the sea. The green of pine woods. Brushstrokes of colour from the palette of pleasures that is Vila Real de Santo Antonio and its municipality, natural charms complemented by the lively cosmopolitan atmosphere of a major tourist centre. The tranquillity of a coast where it is still possible to rediscover solitude. The fauna and flora of a nature reserve and a nature park.

Please fill this form to proceed.

No times for this date! Please change date.